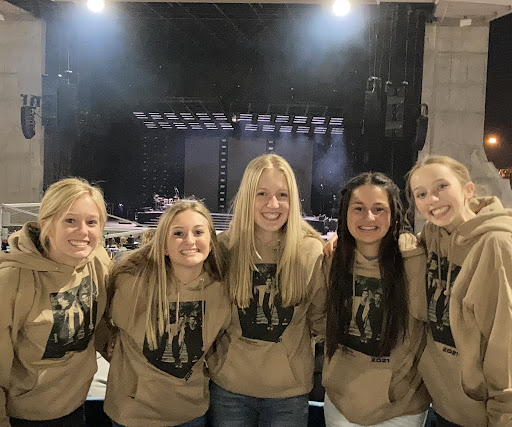 Holdaway and Green standing for the picture with their friends. The venue was located at USANA Amphitheatre, West Valley City, Utah.

Concerts are a big part of entertainment in our country. They are fun, enjoyable, and very loud. Last weekend, the Jonas Brothers had a concert in West Valley, Utah for their ‘Remember This’ tour. MHS students Junior Tessa Holdaway and Junior Lexi Green were able to experience the concert together with some friends.

Green started watching ‘Jonas’ on Disney Plus over quarantine and started becoming a big fan since then.

“I feel like I have always liked them but they haven’t always been my favorite until over quarantine, I watched ‘Jonas’ on Disney Plus and then I thought they were so cool,” Green said.

Holdaway enjoys most of their songs, but if she had to choose she still has a favorite one.

“I like all of their songs, but I really like the song ‘What A Man Gotta Do’ because it’s pretty groovy,” Holdaway said.

Green had always heard them on the radio since they are pretty common, but later on Green started to listen to their songs a lot more.

“When their ‘Happiness Begins’ album came out, that’s when I really started to listen to their songs a lot more and then I thought it would be super fun to go to one of their concerts,” Green said.

Holdaway and her friends were lucky enough to only have to drive 3 ½ hours to get there.

“We were in class last school year when my friend told us the Jonas Brothers were going on tour and we all wanted to go because we were all obsessed with them so we bought tickets not long after and we were ready for the concert,” Holdaway said.

Although Nick is commonly known for being the favorite brother, Green also really likes Joe Jonas too.

“I love Nick and everyone thinks he’s so hot but I love how Joe at the concert got so into it, he was super energetic, had a lot of energy, he would dance, and you could see he was super sweaty,” Green said.

This concert was Holdaway’s third concert but this one was definitely her favorite.

“It was definitely the best time of my life and I don’t think my wedding will even trump it,”

Holdaway said. “Nick welcomed us into their family and I thought I was going to cry.”

This was Green’s first concert and she hopes to go to another one of their concerts.

“It was my first concert and it was so much fun, I just loved how loud it was and how everyone was screaming,” Green said.

Holdaway and Green really had a fun time together at the concert and are really big fans of the Jonas Brothers.

“If you’re not a fan of the Jonas Brothers you better become one because they are the best,” Holdaway said.